has been a full professor and Chair for Biological Imaging at Technische Universität München and director of the Institute of Biological and Medical Imaging at Helmholtz Zentrum München since 2007. Dr. Ntziachristos studied electrical engineering at Aristotle University, Thessaloniki, and received his Master’s and Doctorate degrees in Bioengineering from the University of Pennsylvania. He was faculty at Harvard University and the director of the Laboratory for Bio-Optics at Massachusetts General Hospital. His research  focuses on novel optical and optoacoustic imaging methods for probing physiological and molecular events in tissues. Among many awards, he has received the 2014 Germany’s Innovation Award, the Leibniz Prize in 2013 and the Erwin Schrödinger Prize in 2011.

Abstract: Optical imaging is unequivocally the most versatile and widely used visualization modality in the life sciences. Yet it is significantly limited by photon scattering. For the past few years there has been an emergence of powerful new optical imaging methods that can offer high resolution imaging beyond the penetration limits of microscopic methods. Of particular importance is the development of multi-spectral opto-acoustic tomography (MSOT) that brings unprecedented optical imaging performance in visualizing anatomical, physiological and molecular imaging biomarkers. Some of the attractive features of the method are the ability to offer 10–100 microns resolution through several millimeters to centimeters of tissue and real-time imaging. In parallel we have achieved the clinical translation of targeted fluorescent probes, which opens new ways in the interventional detection of cancer. This talk describes current progress with methods and applications for in-vivo optical and opto-acoustic imaging and outlines how new opto-acoustic and fluorescence imaging concepts are necessary for accurate and quantitative molecular investigations in tissues. is a full professor at the Technische Universität München where he heads the Biomedical Physics group. After studying physics at the Ludwig Maximilian University in Munich, Dr. Pfeiffer completed his PhD studies at the University of Saarland while experimenting at large research facilities like the DESY in Hamburg. As a postdoctoral fellow, he conducted research at the University of Illinois, later at the renowned Paul Scherrer Institute in Switzerland. In 2007, he became an assistant professor at the ETH Lausanne and was appointed a full professor at the Technische Universität München in 2009, where he developed a laboratory for biomedical X-ray imaging. In 2011, Dr. Pfeiffer was awarded the prestigious Leibniz Prize for his development of X-ray based phase contrast imaging.

Abstract: The basic principles of x-ray image formation in radiography have remained essentially unchanged since Röntgen first discovered x-rays over a hundred years ago. The conventional approach relies on x-ray attenuation as the sole source of contrast and draws exclusively on ray or geometrical optics to describe and interpret image formation. This approach ignores another, potentially more useful source of contrast, namely the phase information. Phase-contrast imaging techniques, which can be understood using wave optics rather than ray optics, offer ways to augment or complement standard attenuation contrast by incorporating phase information. This presentation will review the recent development and status of x-ray phase-contrast and dark-field imaging in general, and focus particularly on our recent efforts to evaluate x-ray phase-contrast for future clinical applications in radiography and computed tomography. A variety of experimental results will be shown that highlight the potential of this novel method for biomedical, clinical, and industrial applications. The talk concludes with a presentation of first in-vivo results obtained with a small-animal phase-contrast CT scanner, recently developed in our lab. 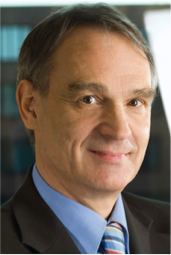 is Founder and CTO of Definiens AG. Born in Frankfurt, Germany, Dr. Binnig studied at the J.W. Goethe University in Frankfurt, where he received his doctorate degree in 1978. He then joined IBM’s Zurich Research Laboratory until 2002. During this time, Dr. Binnig invented and developed the Scanning Tunneling Microscope, STM (together with his colleague Dr. Heinrich Rohrer) and the Atomic Force Microscope, AFM. Both of them were then awarded the Nobel Prize in Physics in 1986. In 1987, Dr. Binnig opened and headed a small IBM research group within the University of Munich, which was the precursor of Definiens. Together with his team at Definiens, Dr. Binnig developed the Cognition Network Technology, nowadays enabling the novel field of Tissue Phenomics®.

Title: Seeing the Invisible – from Microscopy to Big Data

Abstract: In a brief personal historical journey the path from building the first microscope capable of imaging surfaces and molecules atomically resolved to image analysis based big data approaches is presented. With the invention of local probe microscopy the field of nanotechnology was kicked off some 30 years ago. Image processing was performed mainly on individual images and only for visualization purposes or to reduce noise. Image analysis, however, enables the holistic access to the content of a large number of images. This has led recently to a new big data approach in medicine, in particular in histopathology. Through modern staining and imaging techniques of tissue slides nano-sized particles like proteins can be visualized on the basis of conventional optical microscopic methods. This nano-scale information can be combined with morphological evaluations on larger scales. Such comprehensive quantified image contents from many patients can statistically be investigated and correlated to patient survival or therapy response resulting in new insights into the mechanisms of diseases like cancer. This way hypotheses can be tested and knowledge is created which otherwise would not be achievable.