Find the IAS on Google Maps 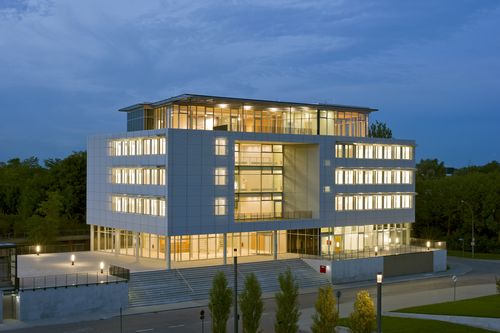 The SPHERIC 2016 will be held in the Faculty Club which is on the top floor of The TUM Institute for Advanced Study (TUM-IAS) on the science campus in Garching, a suburban town of Munich.

The Garching Campus which is about 10 km north of Munich, is one of the most up-to-date seats of research and learning in Europe. It is home to the faculties of Physics, Chemistry, Informatics, Mathematics and Mechanical Engineering, as well as the Garching research reactor. It was founded in 1957 with the installation of the Research Reactor Munich (FRM). In 1969 the physics department of the TU Munich moved to Garching, and over the years the other departments of chemistry, mechanical engineering, mathematics and informatics followed. Its evolution over several decades has given the campus a unique atmosphere through its blend of architectural styles, beautifully surrounded by nature.

Garching campus not only hosts departments of the TU Munich, but also associated research institutions belonging to the Max-Planck Association, the Bavarian Academy of Sciences, European Southern Observatory and institutes belonging to the Ludwig Maximilians Universität Munich. The cooperation between all of these constitutes the scientific competence of the research campus, and with the Heinz Maier-Leibnitz Neutron Research Source (FRM II), the TUM occupies a further leading position in Hi-Tech research.